If you’ve participated in a youth or adult tournament with CHE, you may or may not have noticed that there is always a Lefty Wilson Division.  Since 2002 we’ve made a point of commemorating the great man who graced our office and tournaments with his humor, good nature and wonderful stories. 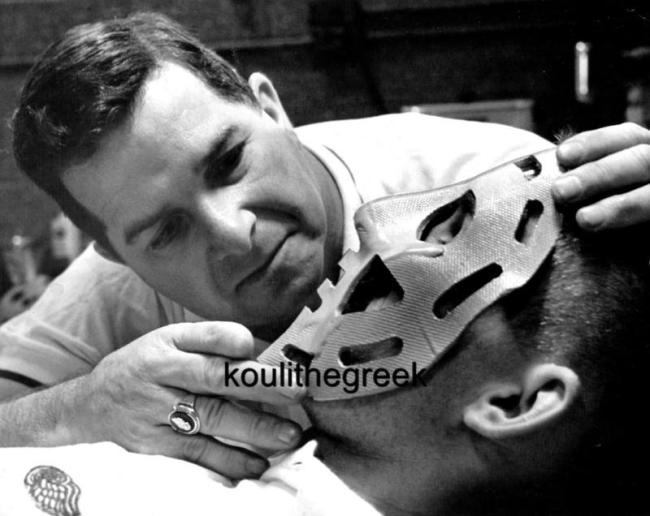 Lefty was the trainer for the Detroit Red Wings from 1950-1982 and was instrumental in the adoption of goalie masks, including Terry Sawchuk’s iconic mask covered in stitches.  He also served as the emergency backup goalie and played 3 NHL games; 1 for the Red Wings, 1 for the opposing Toronto Maple Leafs and 1 for the opposing Boston Bruins. As you can see by his closed eyes in the Red Wings picture, he wasn’t terribly fond of getting hit by the puck.

In 1987 Lefty joined the CHE staff.  He was our designated trainer during tournaments, which primarily consisted of him telling players they weren’t actually hurt and to get back up.  He helped us put together meal tickets in the office, often bruising his hand from the incessant stapling, to the point where we bought him the automatic stapler which we still use today.  More than anything, he provided staff and customers with a never ending string of laughs.  With patented G rated lines such as “go scrub your kilt”, “lord love a duck” and “keep your head up kid” as he raised his left fist and pointed the stub of his right index finger at you.

Everyone who every knew or met Lefty misses him dearly, especially the staff at CHE.  So if you get a chance today, have a drink in his honor but don’t forget to say his patented toast: “Over the lips and past the gums, look out liver here she comes!”

We miss you Lefty.

Everyone at Canadian Hockey Enterprises