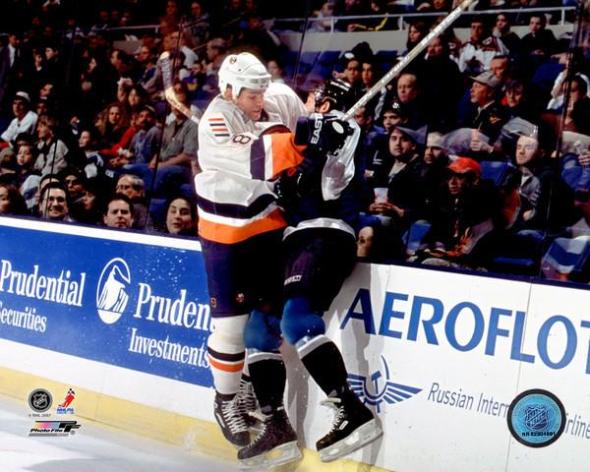 I’m sitting about 20 rows up at the Peterborough Memorial Centre watching the Petes take on the visiting Windsor Spitfires on a typical Thursday night of OHL action.  I never went to many games, but when CHE councillor and family friend Steve Webb was in town with the Spitfires it was as good a reason as any.  And finally, midway through the 3rd period, a quiet skirmish in the corner quickly erupted as Webby and Petes tough guy Matt Johnson squared off at the far end of the ice.  Giving up 7 inches and 25 pounds, little Webby (comparative term) did more than hold his own as he fired his fists as quickly humanly possible for a minute or so until both players fell to the ice on top of a pool of blood.  “Looks like Webby caught him.” said my dad as both players left the ice in front of a roaring crowd, the home town boy having beat up on the local teams goon.  Until we ran into him after the game, we had no idea how wrong we were.  “Got a fresh zipper Crow.” Steve says to my dad in a  wraspy voice with a wry smile and a wink.  He was never the biggest, fastest or strongest player, but there’s one thing that Steve Webb figured out early and did really well: stuck to his roll. 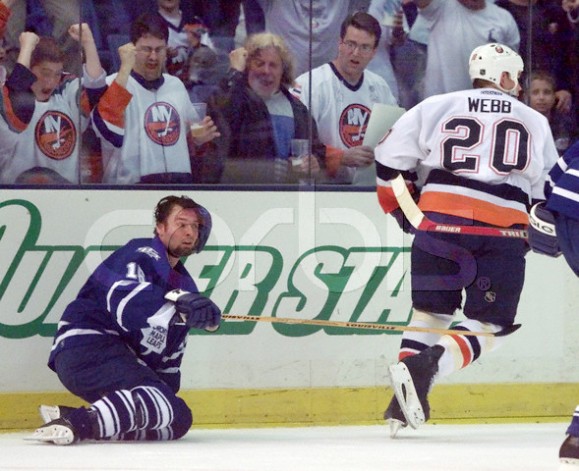 Drafted 176th overall to the Buffalo Sabres in 1994, it took just 2 years for Webby to make his mark in the NHL with the New York Islanders where he quickly gained the respect of his team-mates and the local community.  His hard nosed, blue collar style was exactly what the Long Island fans were looking for after years of sub par teams.  But it was during the 2002 playoff series against the Toronto Maple Leafs the he really made his mark, much to the chagrin of the Maple Leafs faithful.  He made such an impact with the Islander fans a packed Nassau Veterans Memorial Coliseum chanting his name after he annihilated Darcy Tucker into the boards. (Tucker had earlier taken out Islanders captain Michael Peca who missed the rest of the series).  For a self proclaimed ‘slow skater, bad passer and poor shooter” he had a fantastic career in Long Island.  And some dedicated fans have even compiled a video of his impact (literally & figuratively) here.  (NSFW + volume)

These days, Steve has taken his desire to help out his team mates and transferred those skills and desires to helping out people in need in his community.  He started to take part in organizing fundraisers for student athletes, super long bike rides for cancer and all kinds of community activities.  He founded the W20 Foundation in 2007 in order to help student athletes in need be able to attend the college or university of their choice.  W20 is encompassed within Team Up 4 Community and continue to help local athletes take the steps necessary to achieve their dreams.  (http://www.teamup4community.org/)  He also works with the NHLPA as a divisional representative and from time to time he even graces us with his presence at one of our Adult Hockey Tournament or Camps.  Usually he goes to Lake Placid…he really likes Lake Placid.